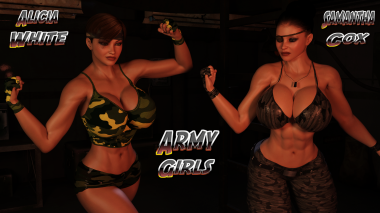 Product Code:3DS0142
Do you have any questions?
Email Us: contact@blanchecatfight.com
Two sexy army chicks brawl it out
Disponibilitate: Available right now
22,44 €
Description +-

Introducing the Blood Angels , special task force tasked with with the most infamous ops in the military , tough sexy girls serving at their best , but when one OP goes terribly wrong blame and insults start to fly in the secret bunker that serves as their base . And of course that is not all , they wanna settle it for good and settle they will , with their fists . Big boobs punched , toned abs taking a heavy punishment and nasty blows to the face , they'll stop at nothing to beat the other girl down and prove who's the army's top bitch . In the end one girl is left knocked out ,bloodied , beaten and tasked with cleaning the toilets ... well with a toothbrush ... like in the army