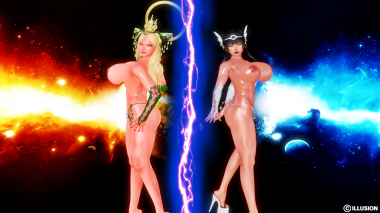 There can be only one

Product Code:3DS0127
Do you have any questions?
Email Us: contact@blanchecatfight.com
A steamy titfight between sun and moon goddesses
Disponibilitate: Available right now
$20.00
Description +-

There can be  only one !! that was the answer that both Arinna and Elune gave when the elder gods asked why would they go to such lenght and duel with their own existence as stake . Arinna the goddess of sun and Elune the goddess of moon have been long time rivals as they were sharing the rule over the under realm . The endless circle , sun and moon always rotating made those two grew  an immense hate for each other , a hate which they couldn't really contain any longer . But they were goddesses which means their bodies were indestructible and no matter how hard they tried those two never could hurt each other, however we all know that a goddess power reside in her breasts , the bigger , the stronger she is and ... hell .. this two were really big ... another subject of endless debate and bickering between Arinna and Elune , who is the strongest .. and more important the biggest . And so a solution was found , despite  their immortality there was a part of their body who could be harmed , if proper weapon was used , their breasts could be harmed by the other goddess breasts ... which only led to a logical conclusion ... Arina and Elune will fight with their boobs until one goddess proves the weakest and her own essence is absorbed by the stronger one